CHILDREN OF ALL AGES ENJOYED A WORKSHOP LINKING VERSE AND ART AT THIS FIRST INTERNATIONAL POETRY FESTIVAL. THEY PAINTED THEIR OWN VERSIONS OF A FISH THAT MAGICALLY MERGES  WITH THE UNIVERSE AND COMPOSED VERSE FROM COLLAGE, TO PRODUCE A LIVELY FRIEZE FOR THE WALL.

AND THERE WAS AN OUTSTANDING EXHIBITION OF PHOTOGRAPHY BY  POET AND ARTIST KYRIOKOS SYFILTZOGLOU. HE IS DRAWN TO THE DESOLATION OF DERELICT BUILDINGS, BROKEN BOATS, SCATTERED STONES.  EACH IMAGE IS SYMBOLIC OF A RAW EMOTION; HARSH, HAZY, CRUEL, MYSTERIOUSLY MOVING. 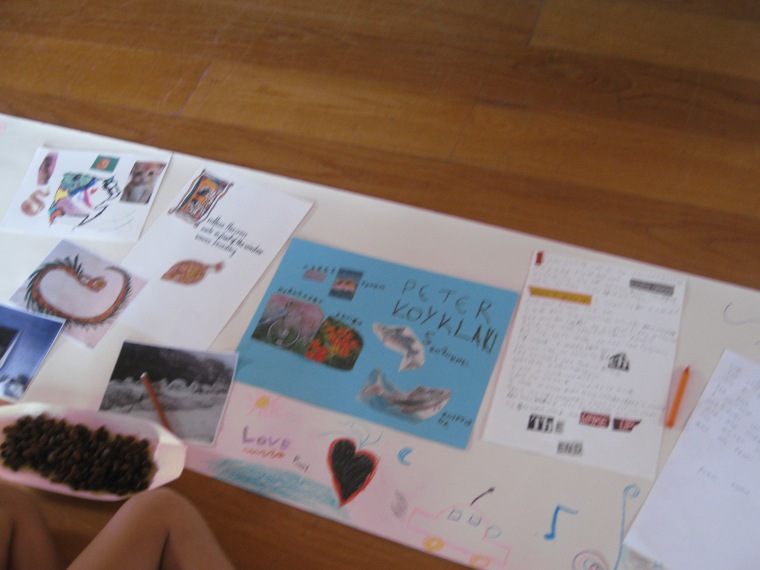 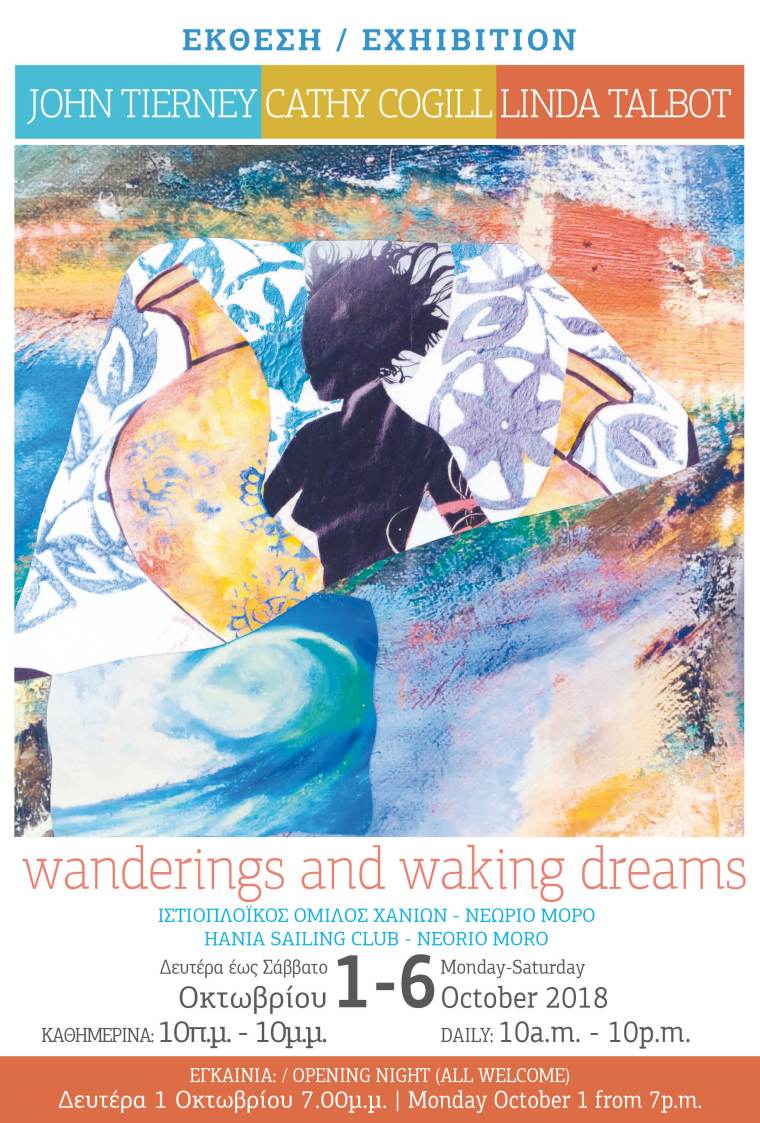 An exhibition by John Tierney, Cathy Cogill and Linda Talbot at the Sailing Club of Hania Neorio Moro, Old Harbour, Hania from Ocober 1 to 6  2018.  Open daily from 10am to 10pm

John Tierney’s abstractions are explosive collisions of concept and colour open to personal interpretation. He sees them as “wanderings” – along a road  to an unknown destination. A strong colour may induce the first brush strokes, then the way evolves to a point on the horizon, taking baffling byways and eventually coming to a place that may already be familiar.

He was in his early 30s when he started painting and was much influenced by growing up on a farm in America. He has since exhibited in countries from Mexico and France to Canada, Germany and Slovakia. H did a stint with the peace corps in Africa, teaching agriculture and how to build houses, painted in Rajasthan in India and lived on a kibbutz in Israel. This was all grist to his mill of melding emotion and fearless colour. He claims, “ There is no big difference between realism and abstraction. They all flow with the same current.”

He would steal into Montreal art schools and draw because the models were free but decided art school was not for him so did not attend. “I learned by hard work and looking at past masters,” he explains. “People react differently to my work, acccording to who they are. I express myself with colour and form which opens doors for me and others.”

Cathy Cogill, who comes from Australia but spends much time in Hania, is drawn to the power of the sea and constantly paints it breaking. Within her waves lies a palette of colour, from deep green and light-charged blue to the white froth and flow of the waves’ crests. She also paints aspects of life in Greece and has made mosaics which she studied in Cyprus, Delos and Ravenna.

“Greece and the sea are the two themes that strongly define my life and my painting and to which I constantly return ,” she says. “My need to be immersed in these two visually stimulating places helps my endless exploration and representation of them.

“For this exhibition I hope that my attempt to capture the power and fluidity of the breaking wave in a fleeting moment of time will provide a strong contrast to the timeless solidity of the iconic white-washed Greek architecture. And I think that the predominantly blue and white palette creates an overall unity.”

In her collages, Linda Talbot moves from echoes of Greek mythology to a comment on the devastation man is inflicting on our planet. This is a selection from several series of her work – from “Arcadia Re-visited” to “From Cloudscape to Clay” – a personal take on Earth and Sky.

She creates the collages, often in mixed media, from watercolour to Indian woodblocks, monoprint and paper, veering from humour to ambiguous encounters in the past, present and future.

There is a skit on the Three Graces at Home, imprisoned in empty bottles, Gaudi’s Garden House, inspired by that artist’s audacious use of colour and form and Blue Peacocks, combining an unworldly redhead with the artist’s photo of an oriental plate.

Elsewhere she comments on the chaos and decline of Earth thanks to man’s negligence. “Burnt Out Forest” is a semi-abstract comment on  traumatic demise, while in works from “The Secret Garden” series there is entrapment and ghostly implications in the dark.

WEIRD LOOKS AT AN OLD WORLD

Through the transparent floor, there is a white body floating through time among the Byzantine ruins  under the church of San Rocco in Splantzia, Hania. It is the creepy reflection of a video by Nikos Giavropoulos in the exhibition “Beginning and End”, open until August 12 2018. In his short videos this artist updates the iconic “Madonna and Child” and “Pieta” with an immediacy prompting uneasy relevance and appearing to expand the limited space of this gallery that opened after the Venetian church was renovated.

Lamprini Boviatsou shows too; quirky drawings and sculpture combining pencil and oil on metal. And she sculpts a winged “puppet” holding a skull. Her head is a mirror and her disjointed persona open to interpretation. A strange and compelling exhibition.

In July two exhibitions at the Match More Gallery Platanias, blew preconceptions to blazes with gusto and dark humour. FREAKS  by Anthony Frantzeskaki conveyed thoughtful and frivolous issues with weirdly compelling imagery. Two perturbing clay heads, sharing a mask, declare “We’re still lovers”, Narcissus shows off, attempting to seduce to Echo who is blithely indifferent, “The weight, the weight we carry is love” is a frog-like sculpture  bearing a human heart. An intriguingly original selection.

In the Undergound gallery Georgia Matsamaki showed “Delirium Classicum”, with classical imagery combining the clutter and detritus of contemporary life. More wit and audacity here in works such as a giant hamburger replacing the food for the Last Supper, which sounds corny but is cleverly compiled.

Mona Lisa  is being scrutinised, reconsidered and reborn in THE SMILE OF MONA LISA – FIVE CENTURIES OF ARTISTIC APPROPRIATION –  an exhibition that has been at theMATCH MORE Gallery, Platanias an will move to Iraklion in the autumn.

The exhibition at the MATCH MORE is diverse, ingenious and full of humour.

Works from THE LIVING AND THE LOST  exhibition by Linda Talbot, held at the Monastery of Karolos in Hania  in September, 2017. There were three sections: Patterns of Protection, prompted by  protective symbols on ethnic clothes, Lost in a Landscape and Odalisque.

Does the weight of a sad event cast a shadow on your life? Do you long for a means of self expression that will release anger and sadness and help you to heal? If so you may benefit from my new workshop which uses colour to help define emotions as well as creating compositions you can frame.

There is a theory that colours represent qualities and moods, from wisdom and optimism to grief and despair.I do not agree that this is necessarily the case, yet I can see how colours may be used as an insight into a state of mind and as an illustration of aims and desires.

So I give you a colour wheel with a note of what each shade is said to symbolise and with paint, charcoal and collage you create an abstract composition, using the colours and images that express your state of mind.

We analyse this and make a second work, using colours and collage again to express how you would like to feel and what you would like to achieve. So you will have two pictures to frame, hang and contemplate at leisure. 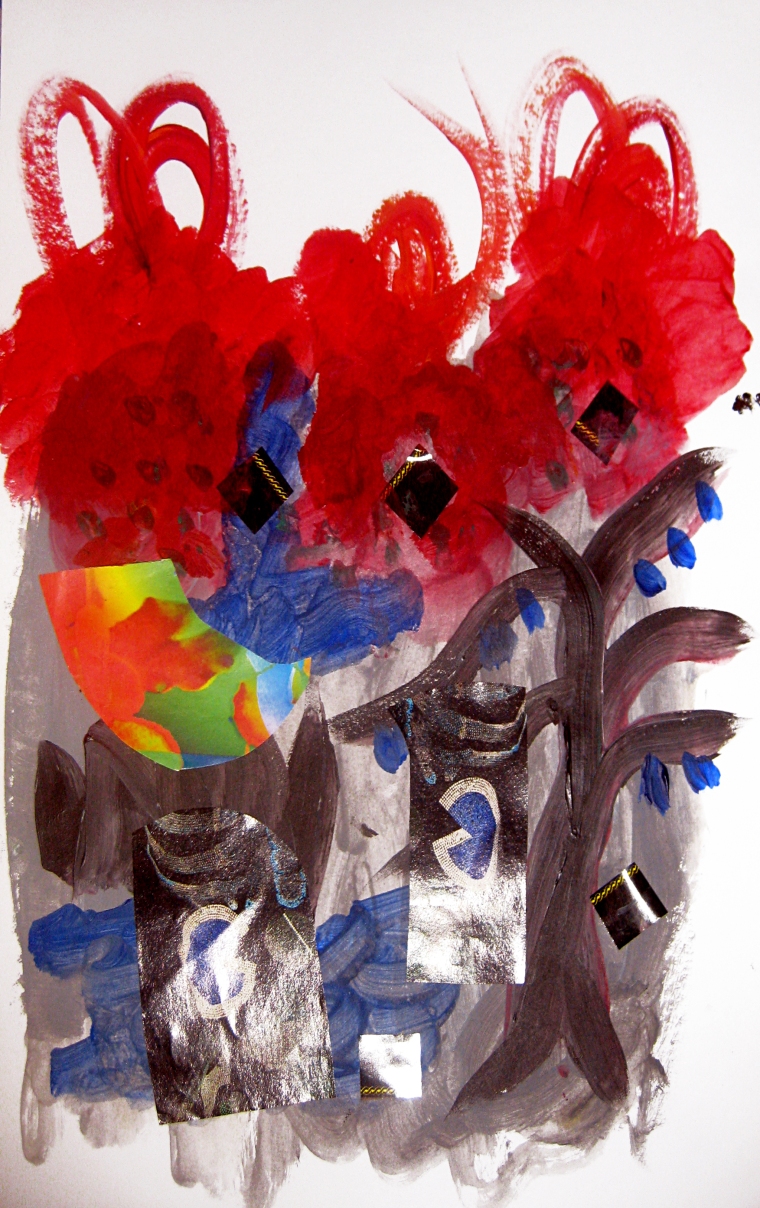 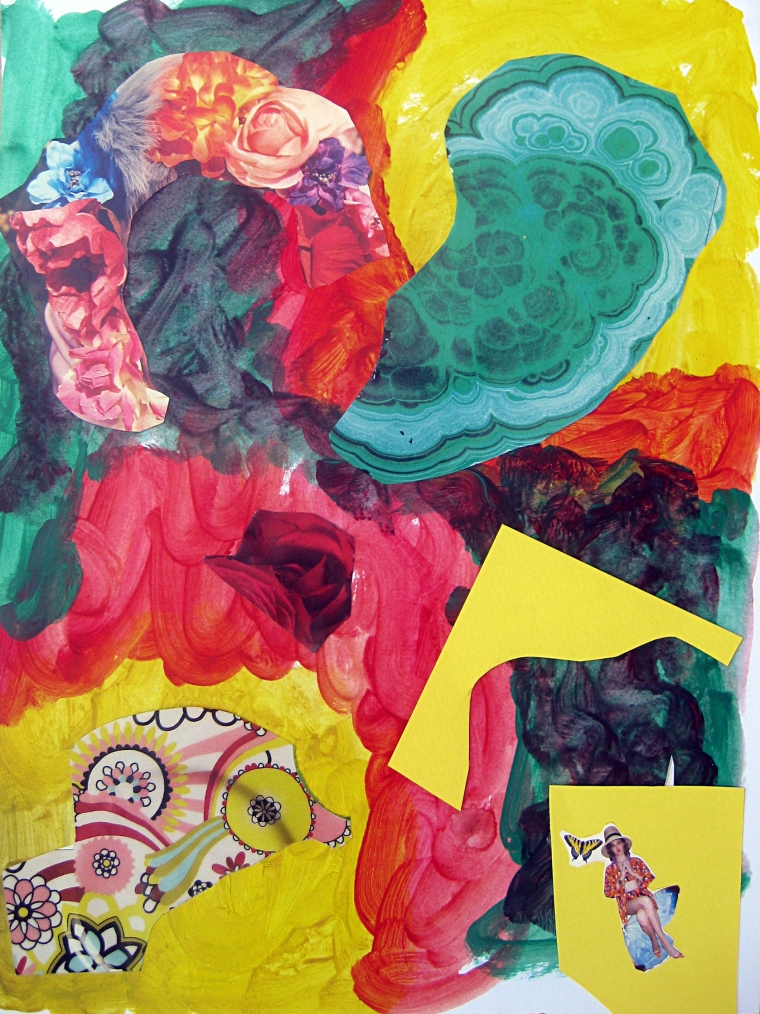 A second work with colours expressing wishes and aims.

The Colour Wheel whose shades may be used to

MANDALA is an optional extension of SELF DISCOVERY THROUGH  COLOUR COMPOSITION. Sanskrit for “circle” or “completion”, the classic mandala is a circle with a centre echoing the basic structure of all creation.

We can use it as psychologist Carl Jung suggested, as ” a representation of the unconscious self.”

Used principally by Buddhists, Tibetans and Hindus, it is now a universal symbol and a unique means of personal expression. The structure is found throughout nature and in biology, chemistry, geology, physics and astronomy.

Every living cell has a nucleus. It is a circle with a centre. Consider flowers, the rings in tree trunks, spirals on a snail shell. Even crystals in ice and rock. Made of atoms, each atom is a mandala.

We draw a simple circle with a centre and with or without more circles inside. Then add an instinctive design or image and colour with shades expressing your current feelings.

Afterwards note the colours used, including those that appeared least. Look at the images and shapes and take note of hard or soft lines, jagged or smooth edges and any high contrasts.

Write down in detail the feelings or memories that the colours and shapes suggest. You should have an insight then into your emotions when you created the mandala.

An exhibition revealing how the work of foreign artists differs from those raised in the Greek tradition, opened at the Match More Underground Gallery in Platanias, Hania, Crete in January 2017.   Called “Xenion. Summoning Familiarity – contributions were from foreign artists living in Greece and abroad and disclosed diverse backgrounds contrasting with Greek traditions.

The gallery is inside the Match More restaurant, where menus change each week and customers can combine an excellent meal with a wander through the artistic imagination.

Restaurant and gallery were opened by Dr Constantinos Proimos who curates the exhibitions with Ioannis Arhontakis of the Olive Press Art Factory in Drumonero.

“As soon as I saw the building, I knew it would make a wonderful gallery as well as restaurant” says Dr Proimos,  art critic and adjunct lecturer at the Hellenic Open University. There are works by Greek artists in the restaurant.

There is a glamorous ghost haunting Sea Songs Studio. She is SEMIRAMIS – the extraodinary Babylonian queen  who ruled Assyria, as regent between 824 and 811BC when he husband  Shamsi-Adad died. Her son was still too young to rule.

She took over an empire in strife after a savage civil war and stabilised society, personally leading her soldiers into war and building artificial banks to contain the Euphrates.  She conquered most of the Middle East but met her match when invading India – creating “false” elephants by laying dark buffalo skins over camels. This did not work. She was killed and her army routed.

I have started a series of collages inspired by her. Here are the first two: